Pure Base Distribution, LLC of Ontario, CA is recalling its 4 ounce bottles of "Pure Base Garlic Spread - Concentrate" and 7 ounce bottles of "Pure Base Garlic Spread - Ready to Spread" items because they may contain undeclared milk and wheat. People who have allergies to milk and/or wheat run the risk of serious or life-threatening allergic reaction if they consume these products. If you or a member of your household is allergic to milk or wheat products, do not consume these products, but return them to your retailer for a full refund.

Fun at the beach

In late May 2010 we spent a few days in Manzanita at the Northern Oregon Coast.  FYI - we love Manzanita for its long, long beaches, for it's quietness, and also for it's natural food store offering everything from Soy Milk, to Soy Ice Cream all the way down to Vegan Cheese 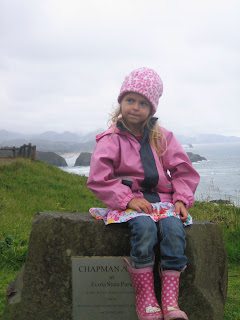 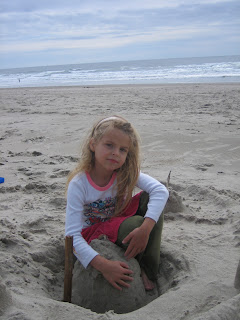 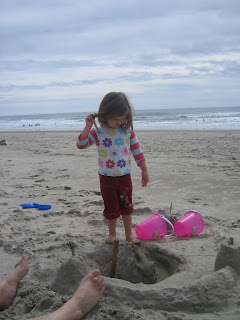 Playing at the beach in Manzanita 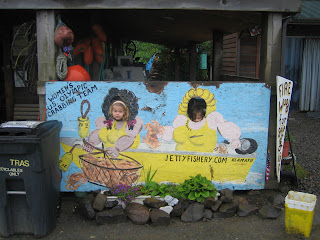 Fun on a grey Monday afternoon

Oh, what a beautiful and sunny weekend we had.  The sun has finally arrived, the rain is gone but today...well, another story.  OK - I must be grateful for that there is no rain but the sky is grey covering up the sun.  Today was Alena's second to last day of Kindergarten :( and we needed some fun activity for the afternoon.  Swimming...the three of us love swimming and my first thought was to go to one Public Indoor Pools.  Well, you know what?! Not one of the Portland Pools was having open swim this afternoon leaving me with only one solution.  You know where we went? Yes? Do you?  Well, we went to the proven place at the McMenamin's Kennedy School in Northeast Portland.  Oh yes, there is nothing like an hour soaking in a lovely warm soaking pool.  All of us having fun. -> http://www.mcmenamins.com/166-kennedy-school-soaking-pool

We topped the afternoon off with a nutritious treat of a basket of Tater Tots along with Honey Mustard Dressing (when you go beware to special order that as it usually comes with Ranch). Ahhhhh....nice all that swimming made our afternoon so much better :)  Mia Rosie actually slept for a couple of hours while Alena is enjoying some time on the computer with "Die Maus.  Here is the link to Die Maus :) http://www.wdrmaus.de/
Posted by Bea @ The Not So Cheesy Kitchen at 5:58 PM

Please see details on this recall below. Product affected was sold in California, Oregon, Idaho, and Washington.

Would life be different without Galactosemia?

Does this sound like a strange question to you?  Well, it is one of those questions that sometimes go through my head...Why?  Because I am really not the mother I thought I would be.  Hmmm, maybe the title should be changed....In any case, I am certainly not the mother I imagined to be.  I had Alena in my third year, end of first semester of law school.  My vision at the time was as follows - I will have the baby, go back full-time to school, sit for the bar, and then take full-time job.  Yes, the baby was to be part of my life but you know I would not be giving anything up.  In retrospect that whole thought process scares me.  What on earth was I thinking???  In any case, as you know life happened differently.  Alena was born - on schedule as I may add - and she was a beautiful, healthy child.  I was already thinking about my upcoming exam!!! Then life happened - in less than a week Alena was fighting for her life.  And that is the point when everything else was no longer important to me.  That is the the point when the only thing that mattered to me was my child, and my spouse.  It has been from that point on forward that my life centers around my family.  Yes, I do work a couple of days a week but the main focus on is my family.  That is why I work part-time. Without Galactosemia, my main focus most likely would be a job first and, then my family.  Without Galactosemia I would take life much for for granted.  With Galactosemia I realize how fragile life really is.  That we need to be grateful to have each other and to appreciate each other daily.  So to me, Galactosemia is what set me on the track I should have been on all along.  In my mind, things happen for a purpose and you know what that old saying "when life throws you lemons make lemonade..."  So to answer my question, life would be different without Galactosemia...

Springtime at the Rhododendron Garden...just some pictures


Here are a few pictures taken in late May 2010 at the Portland Rhododendron Garden... 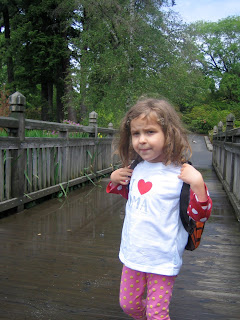 A serious looking Mia Rosie is ready to take her backpack off :))) 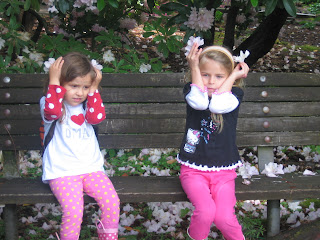 Look at these bunnies with Rhodie blossom ears :))) 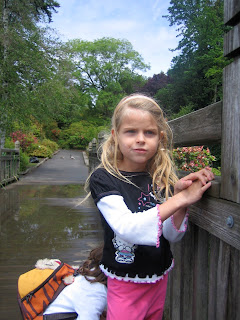 There is actually some blue sky....see the puddles? 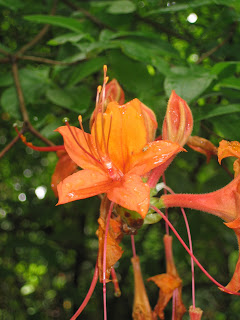 The last picture is for the flower lover...I took the picture on the same day, and location....

Everyone has school plays at the end of the year and I am sure that they are an exciting time for everyone.  Alena also had at her school just like in the previous two years.  The school play at Childswork however is a little different because the students write the play, they create the stage decoration, and also make all of their costumes.  It is just amazing to see what these young children are capable off. The teachers are guiding the children, but the outcome is truly amazing.  Just look at Alena's costume 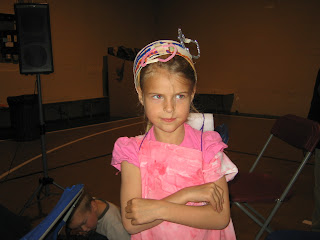 isn't it wonderful?! A pillow case cut, and painted, wings, and a head-piece.  What do you think?  Here is a picture of the entire class 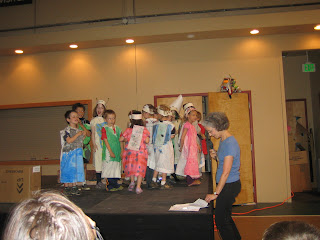 aren't they just adorable? - Needless to say that both of us were two very proud parents.

Now about the after party.  Last year the after party took place at Ben & Jerry's which is one of our favorite ice cream places. They always have at least four different options which are CG safe.  This year a parent suggested to go out to a restaurant for ice cream for the after party.  I honestly was not thrilled about this idea.  I called the restaurant just to find out that there are zero no dairy dessert options, "...but you can bring your own..." I was told.  My first inclination was no way!!! But then again, Alena would feel terrible if we would not join the rest of her class.  But still I just did not feel that fantastic about it. Almost everybody else would be served their ice cream in a dish while our girlies would bring their own carton...so I had a thought.  What about if we buy the buy our ice cream, drop it off at the restaurant, go to the play, return to the restaurant and they serve it...sounds kind of crazy, doesn't it?  I called, asked and you know what that is exactly what happened.  I took the girlies to the store, Alena picked out the "ice cream", we dropped it off, and that is what the girls got served.  Their ice cream along with all the other kids...

Now is the time to give kudos.  Kudos to the wonderful teachers and staff at Childswork.  I would like to  particularly recognize Alena's teacher Marlie for calling me a couple of nights before the event to make sure that I was OK with it.  How thoughtful is that?  You know this is Alena's third year at Childswork the only school she has so far gone to.  Before she started school I was so worried, worried what would happen if she ate non-safe foods, worried that she would feel left out and be left out...and now is the time for me to say "Thank you, Childswork!" Thank you for the confidence you have given my child and me.  Alena has learned to always ask if a food is safe for her.  Alena has never felt left out or been left out from any event that has taken place at school.  Thank you for making such a tremendous difference in our lives.  All of teachers that we have met have had such a tremendous impact on us as a family, and also on how we deal with CG. Thank you Marlie, Megan, Sally, Susi, Elianne, Emily, Connie, Megan, Sarah, Jenn, Sarah, Chris, Sundance, Laurie, Michelle and everyone else at this wonderful school.  Sorry if forgot to mention a person, it is not on purpose let me know :)
Posted by Bea @ The Not So Cheesy Kitchen at 10:02 PM

Hi there - I am still here. It has been a crazy couple of weeks around here. School Play, Alena's Do Jump! performance, beach vacation, work,appointments with both girls...I know, all excuses but really has been crazy. So one may wonder, what happened to my New Year's resolution one post a week...maybe I should have stated that this means 52 posts a year?! ;) I surely will achieve that number :)))
Posted by Bea @ The Not So Cheesy Kitchen at 9:03 PM

Better Made Snack Foods Issues an Allergy Alert on Undeclared Dairy in the 3-Ounce Better Made Special Original Potato Sticks
Sun, 30 May 2010 23:09:00 -0500

Better Made Snack Foods of Detroit, Michigan is issuing a voluntary recall only of their Better Made 3-ounce Original Potato Sticks because it may contain undeclared dairy. People who have allergies to dairy run the risk of an allergic reaction.