This is the second post of - hopefully - many others; last month you were introduced to Lisa from Italy. With this series I want you  to meet people from around the world who are living with Classic Galactosemia.  Ten years ago, Classic Galactosemia was something I had never heard about and when Alena was diagnosed it was obscure.  And yes, I wanted to know what with this disorder was like. Once we learned about the treatment {=diet} and the regional treatment differences it got even more confusing.  Not only treatment varies greatly, but also detection through the newborn screening tests varies.  Now without any further ado, please meet Skadi and her family.

Skadi lives in Germany's capital Berlin with her Mom, Dad, and little sister.  I first met Skadi's Mom Ulrike via the internet back in late 2006.  At this time, I am not sure if we originally met through the German Galactosemia support group or just by chance online.  All of us met in 2008 in Berlin where Skadi with her family showed us many of the great sights of the German capitol.

Now are you ready to get to know Skadi and hear her story as told to me by her Mom, Ulrike.

Ulrike had an easy pregnancy with Skadi and she was born on a Wednesday in Berlin, on Friday the hospital performed the heel prick {newborn screen}.  Mom and baby Skadi went home to join Dad on Saturday.   They went on to enjoy the weekend but on Monday - not quite three days after the heel prick -  they received a call from the Charite Hospital where Skadi was born.  Ulrike was told that the newborn screen for Skadi had come back with a positive for Galactosemia.  They were asked to return to the hospital immediately as the clinicians wanted to run additional tests right away.   At the hospital Skadi was immediately admitted and additional tests were run.  The tests were not conclusive as to whether Skadi had Duarte or Classic Galactosemia. On Tuesday the family was sent back home and Ulrike was told to alternate breastfeeding with Soy Formula.   On Wednesday - Skadi was exatctly one week old - Charite Hospital called again and asked they return to the hospital.  They have received a conclusive positive for Classic Galactosemia and Skadi was readmitted to the hospital.  She became jaundiced and was transferred to the Pedicatric ICU.  Her food was changed to Soy Formula. Her condition improved and after about a week Skadi was able to come back home. 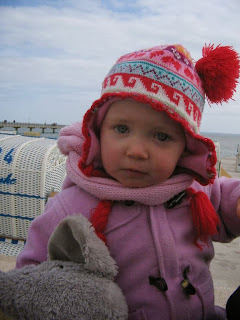 Skadi is now a healthy 2nd grader; she loves to sing, dance, draw, and make crafts.  You know, a regular girl...
When not eating at home, Skadi always asks if the food is safe for her, just like our kids she knows exactly what she cannot eat.  She does - just like all kids - get sad when there is no treat that is safe for her but gets over it quickly just as long as no comments such as "oh, that poor child" are made. Skadi is managed through metabolic clinic at Charite Hospital in Berlin; her diet includes - just like our kids - all fruits, vegetables, beans, legumes, and cheeses. In regards to diet, Skadi's metabolic clinic now allows cheeses that have aged for only three weeks.

Are you interested in being featured?  If so, please contact me by sending an email to germanpdx (at) gmail(dot)com