We have finally made it out to Bagby Hot Springs out in the Mt. Hood National Forest  This has been on my wish list in forever.  By the time I think about it is usually is already quite late in day, and then there is also the little piece of distance.  Now this beauty - depending on your threshold of time spent in the car - is a drive but oh, so totally absolutely worth it and I am not a hot tub fan.  Well, of course this is no hot tub but a hot spring brining absolute mind clearing serenity.  It is in the middle of the woods,  it is a tiny hike about 1-1/2 miles which non-surpisingly still brought on the "When are we finally question - but oh, my.  The trail to the Hot Springs is already magical; green in any variety dark, light, the sound of a river as the trail leads up along a river. It is easy to imagine it as fairy land. 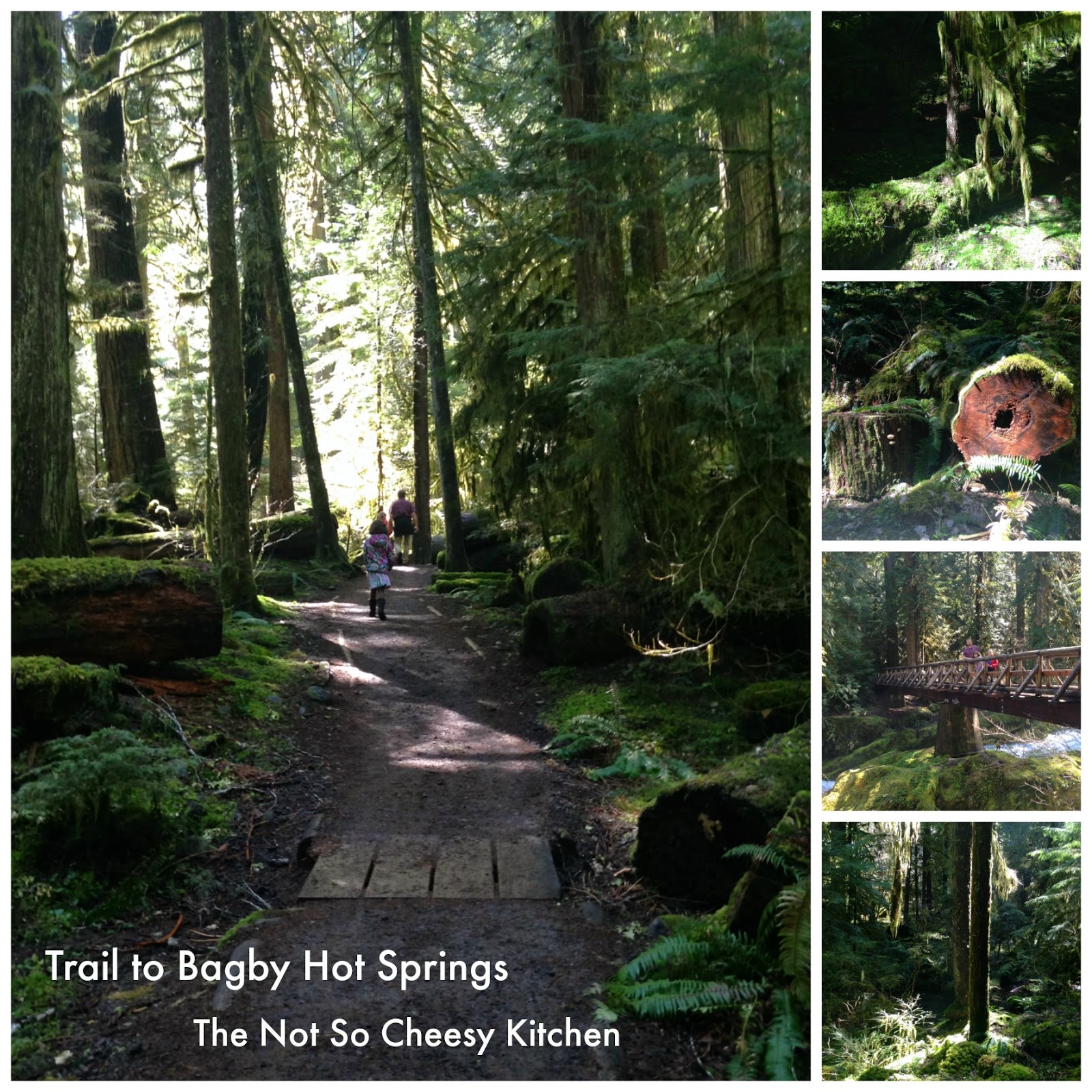 and then just when we thought we missed a turn…. 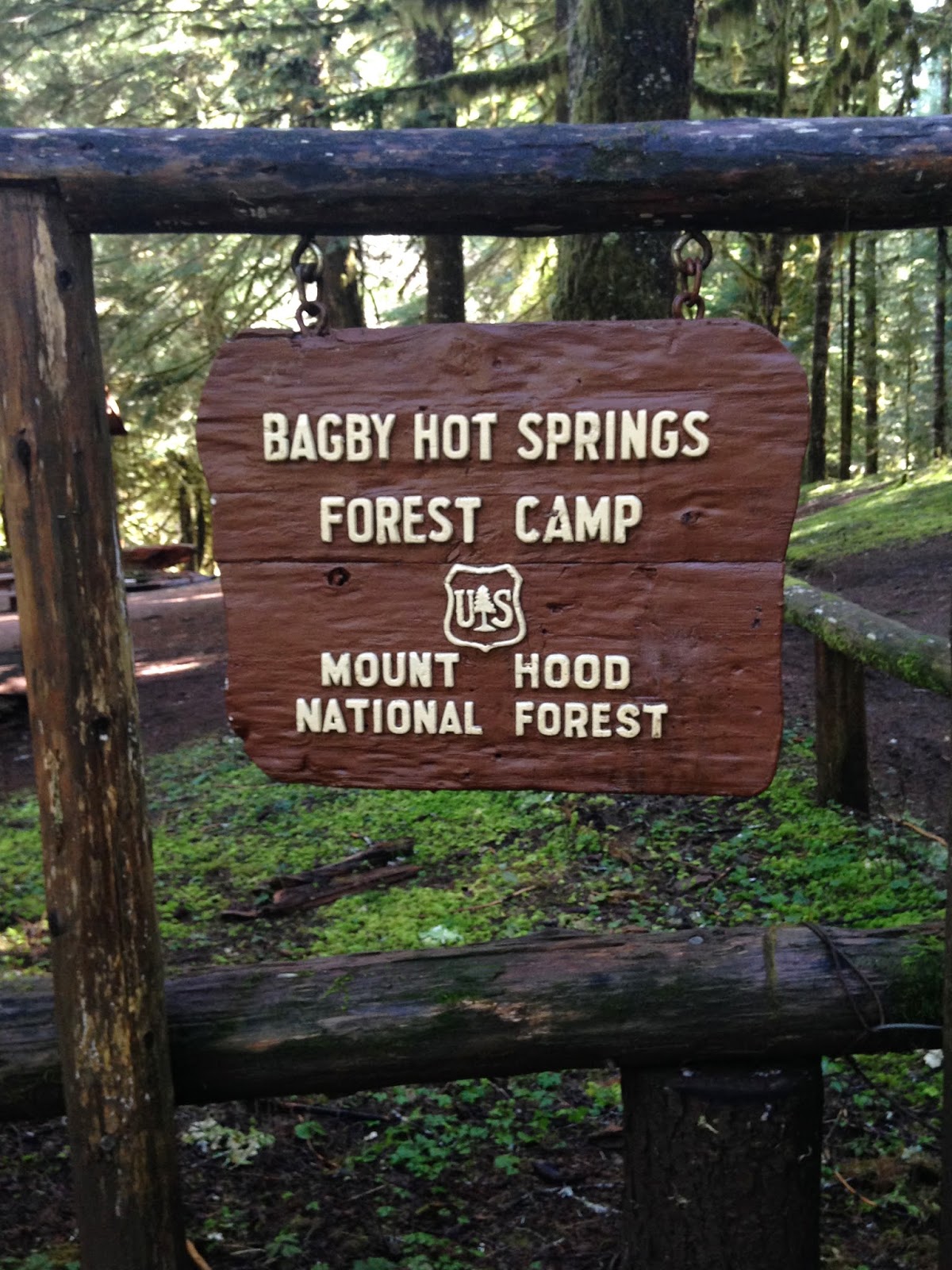 Just a couple steps past the sign  hot water bubbles up and is directed to by wooden lines to the different soaking areas. 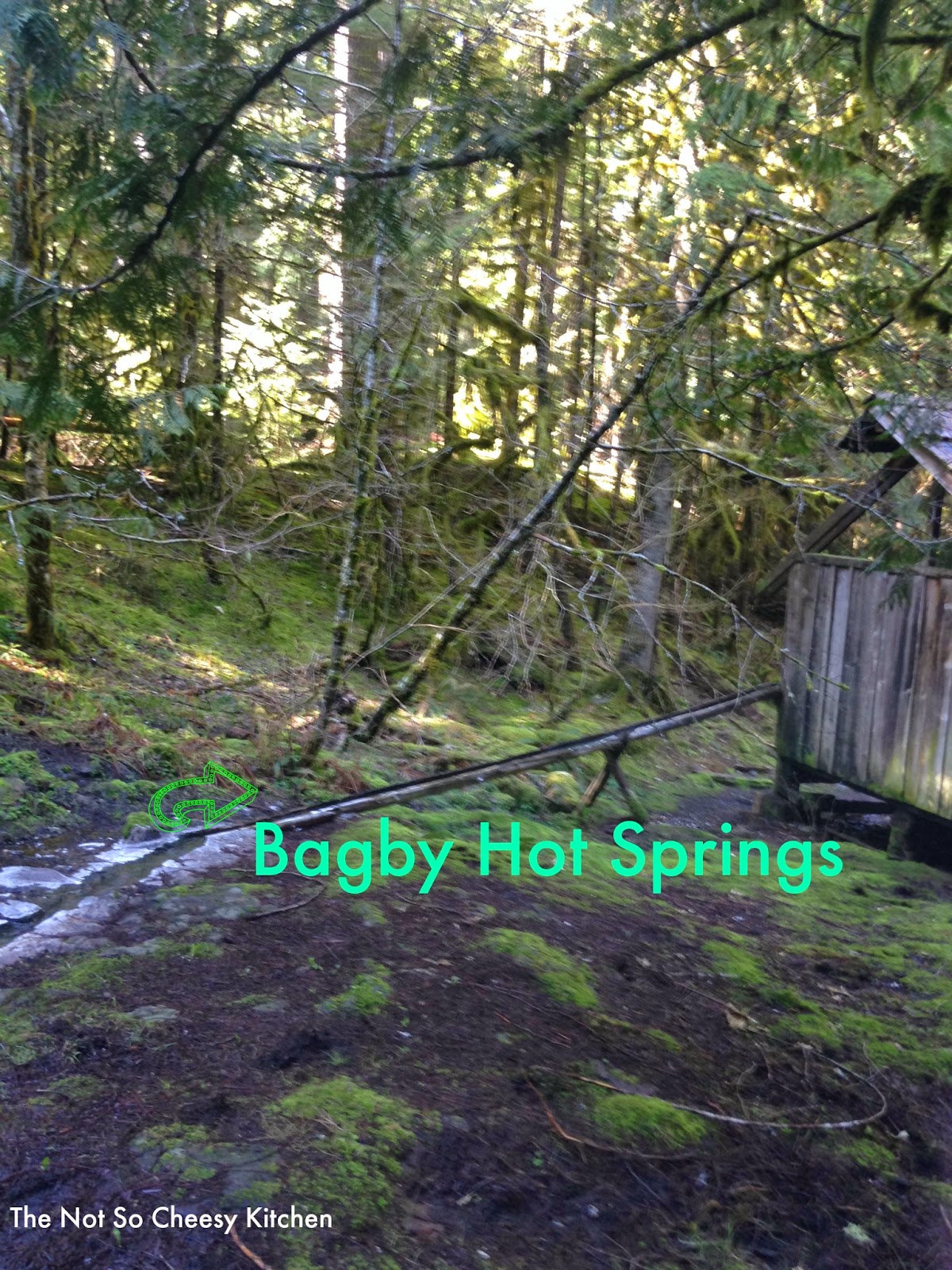 The water runs to the soaking area to five private rooms, about three  round tubs for smaller groups, and a couple of larger tub for a bigger group.  We chose the private soaking room…what to expect?  First off, the tub is a carved out of a cedar log log…Please tell me you are as excited as I am about this.
Once in the room, let the hot water flow in and be sure to get a few buckets of cold water; because the water is hot. Next..soak.  Sit back, relax, look out through the holes in the roof… 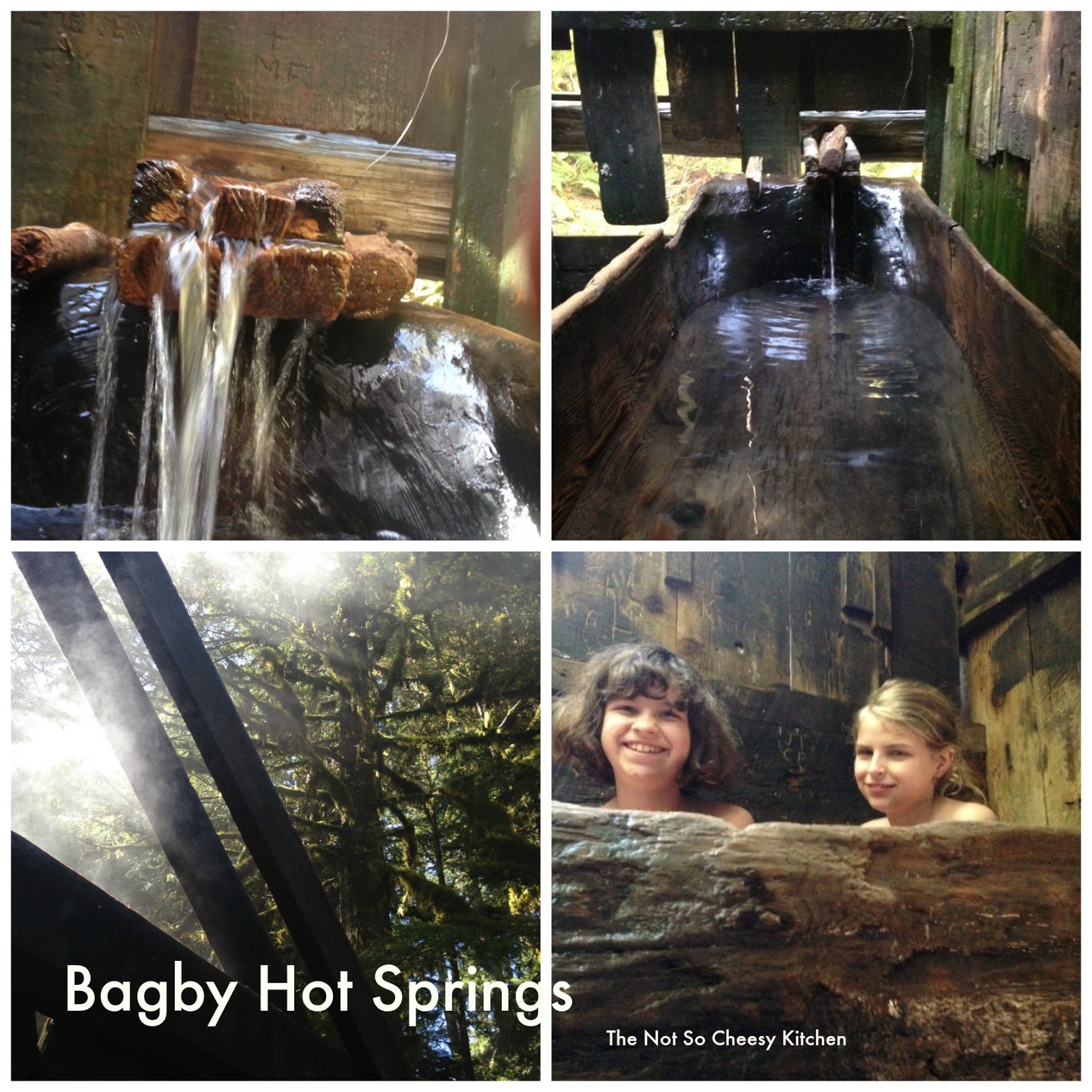 What do you think?  It is absolute bliss….then walk back to the car through the magical forest 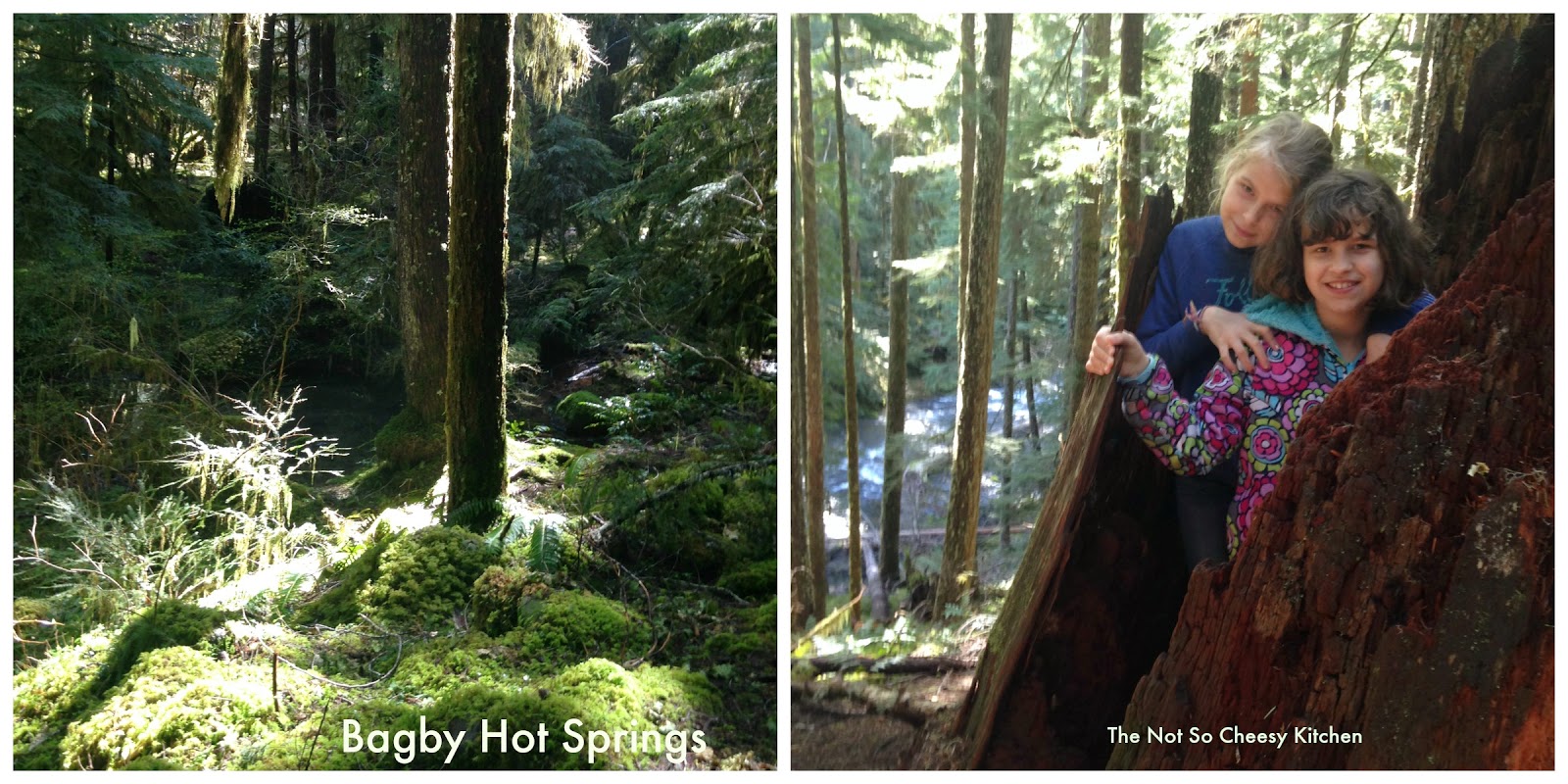 Good to know if you go:
In addition to towels pack water, snacks, and all other stuff you usually bring with you on a hike.  Yes, this is short but it is in the middle of Mt. Hood National Forest, the weather can change, people slip and did I mention that it is in the middle of the woods?  So yes, no matter how close and easy it seems wear sturdy shoes.

There is a $5 {cash only} soaking fee for each adult - so be sure to bring cash, or get your wristband the Ripplebrook Store.  Bagby Hot Springs are about 40 miles SouthEast of Estacada so yes,  it takes some time to get out there but it is so worth is.

Lastly,  it does get very busy so be prepared to wait and most of all have fun!

Links to this post
Email ThisBlogThis!Share to TwitterShare to FacebookShare to Pinterest
Labels: day trip, Fun with kids, Oregon day trip, outdoors with kids in Oregon, Travel, Travel with Kids

Happy Wednesday! How are you? - Everything here at The Not So Cheesy Kitchen is great, I just needed a little hiatus but now I am back and {in my mind} many posts are lined up.  Now,  I just need to get them all out of my head onto paper  the screen.  Will tell you all about our adventures these past few weeks, just stick with me.  Pretty please?!
Portland weather has been absolutely spectacular these past few days with summer like temperatures.  Yes, it feels more like summer than early spring and we are ready for picnics as well as cooking out. This easy Picnic Pearl Couscous Salad is the perfect side for any picnic.  It comes together quickly, is fun to eat and all it needs is enough time to absorb all the flavors. 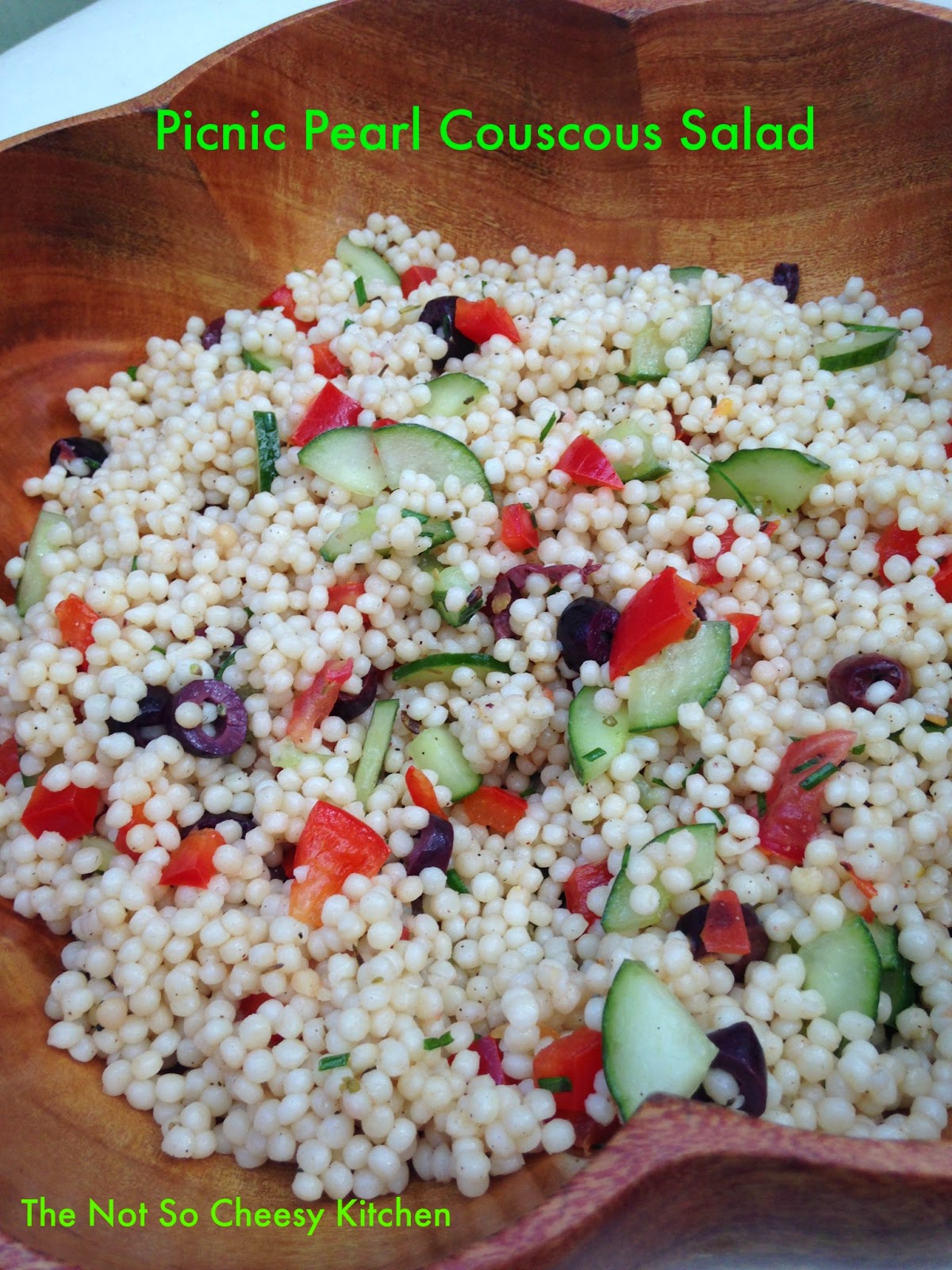 No, this is not an April first joke it is actually me posting…can you believe my super long break?!  I am really waiting for that tool to transpose my posts from my brain to my blog.  Yes, I have been saying that for a long time it's lame but yes, so many, many posts lined up in my head and oh so little time.  Well, truth be said that lately I have also been feeling a little worn out ~ not to worry the family is all right just me being a little under the weather.

I am happy to announce that our 2015 camping season has opened.  Okay, truth be said we did not yet break the tent out and instead camped in a yurt at Forth Stevens Oregon State Park {Northern coast} which is perfect especially in chilly weather as there is heat, electricity, as well as beds.  Take a look 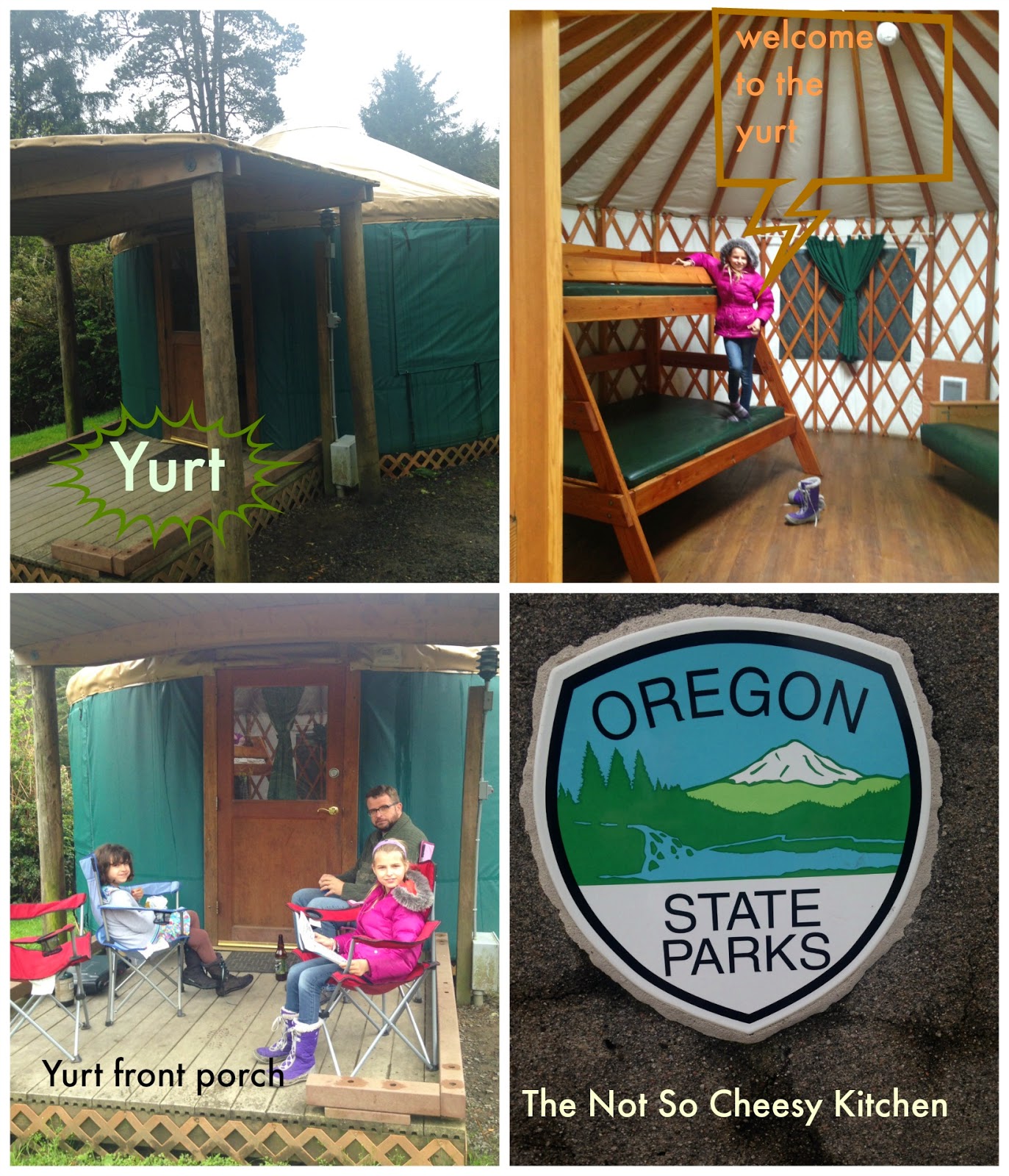 It's super fun and dry…We arrived on a Monday - it being March and the Oregon coast - there was a chill in the air and a slight drizzle in the air.  After setting up camp, we took a quick drive to the beach to explore the wreck of the Peter Iredale a ship that ran ashore in 1906. 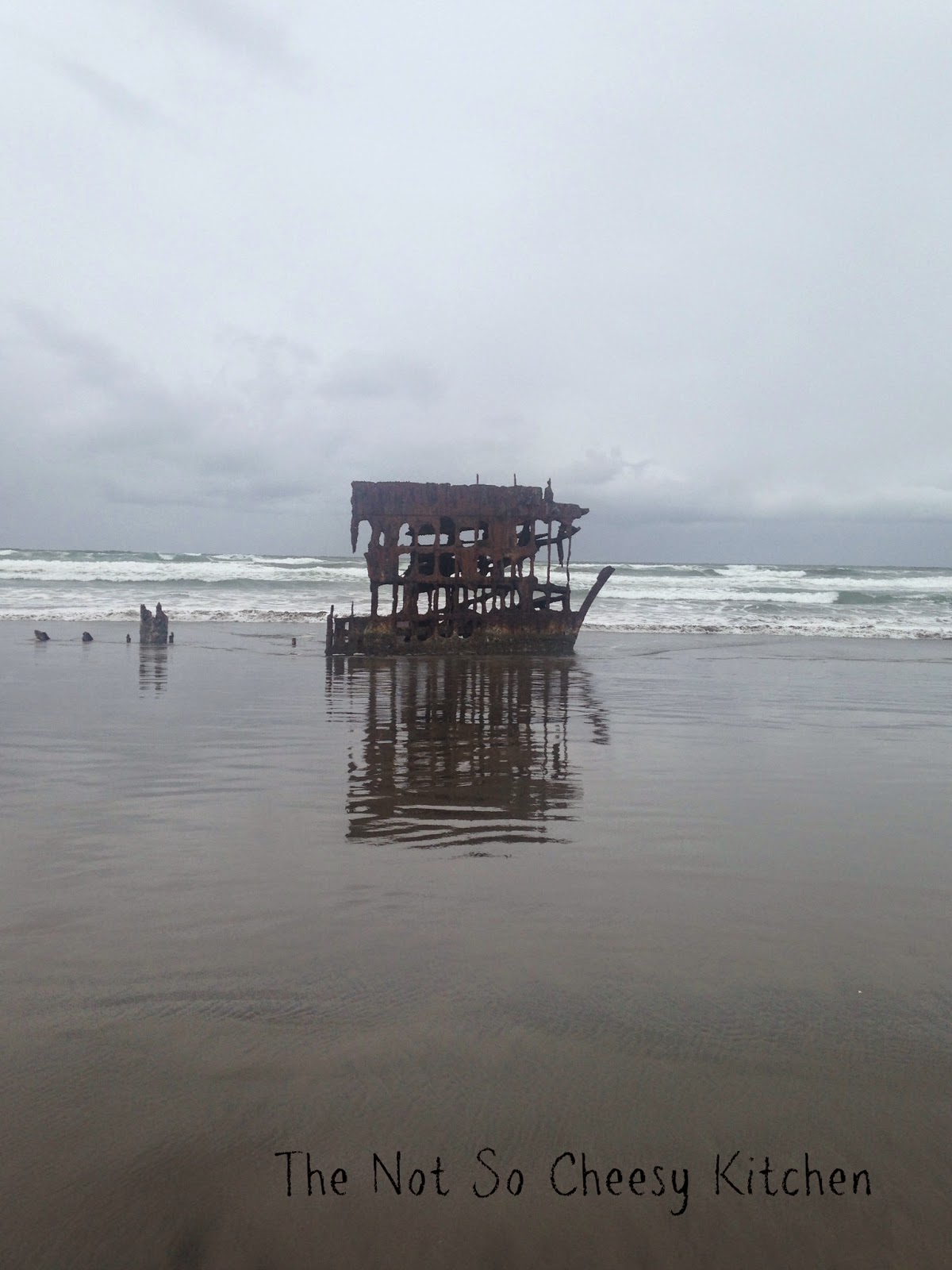 This was the first time we have seen it, really the first time that I have seen a real-life shipwreck and I do think that there is a certain mystique about it. You, know I was thinking about the hands that built the ship, the people that sailed on it the merchandise…okay, okay I am getting a little carried away...

The next stop was dinner and when in Astoria or close to it Fort George Brewery  is our place to go.  Let me just say that the beer is delicious and the food is not shabby either.  They certainly always have options for the girls.  In addition to the regular pub fare on the lower level,  the restaurant has expanded the upstairs into a pizzeria including a wood burning oven.  Feeling more like pub food - fish tacos for me friers - we stayed downstairs, gobbled down our food, enjoyed the beer, and took in the atmosphere of the steady downpour…. 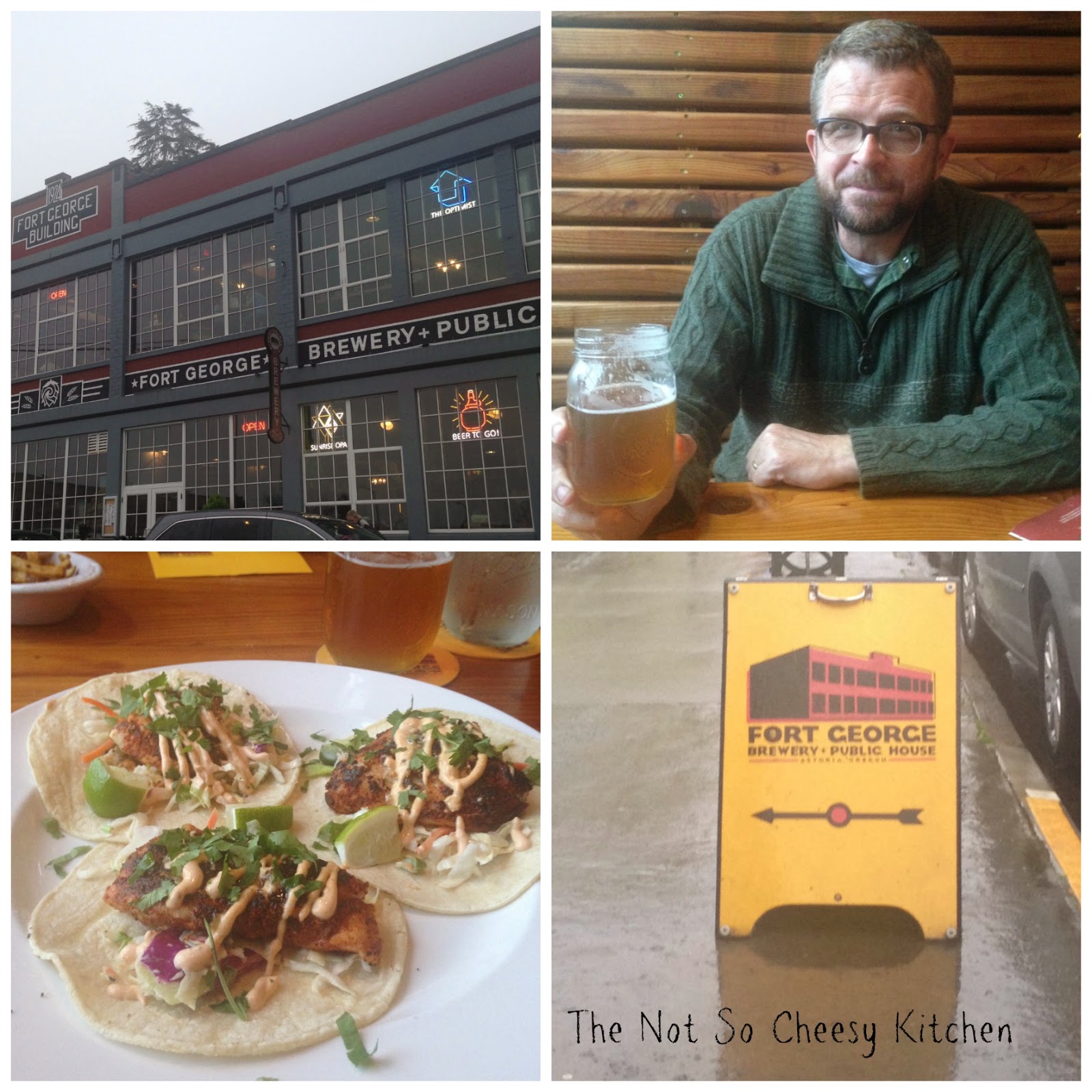 After dinner back to the yurt - yay for the yurt in the pouring rain - a nice game of Eckolo with Alena, comfortable beds and sleeping to the sound of the rain without worry.

We woke up to an almost dry day - you know the kind with lots of dry patches, sun, and intermittent rain.  Ron - always the camp chef - made us bacon and coffee/tea for breakfast…before we took a nice long walk to Coffenbury Lake (you can swim in the summer) to the beach and back. 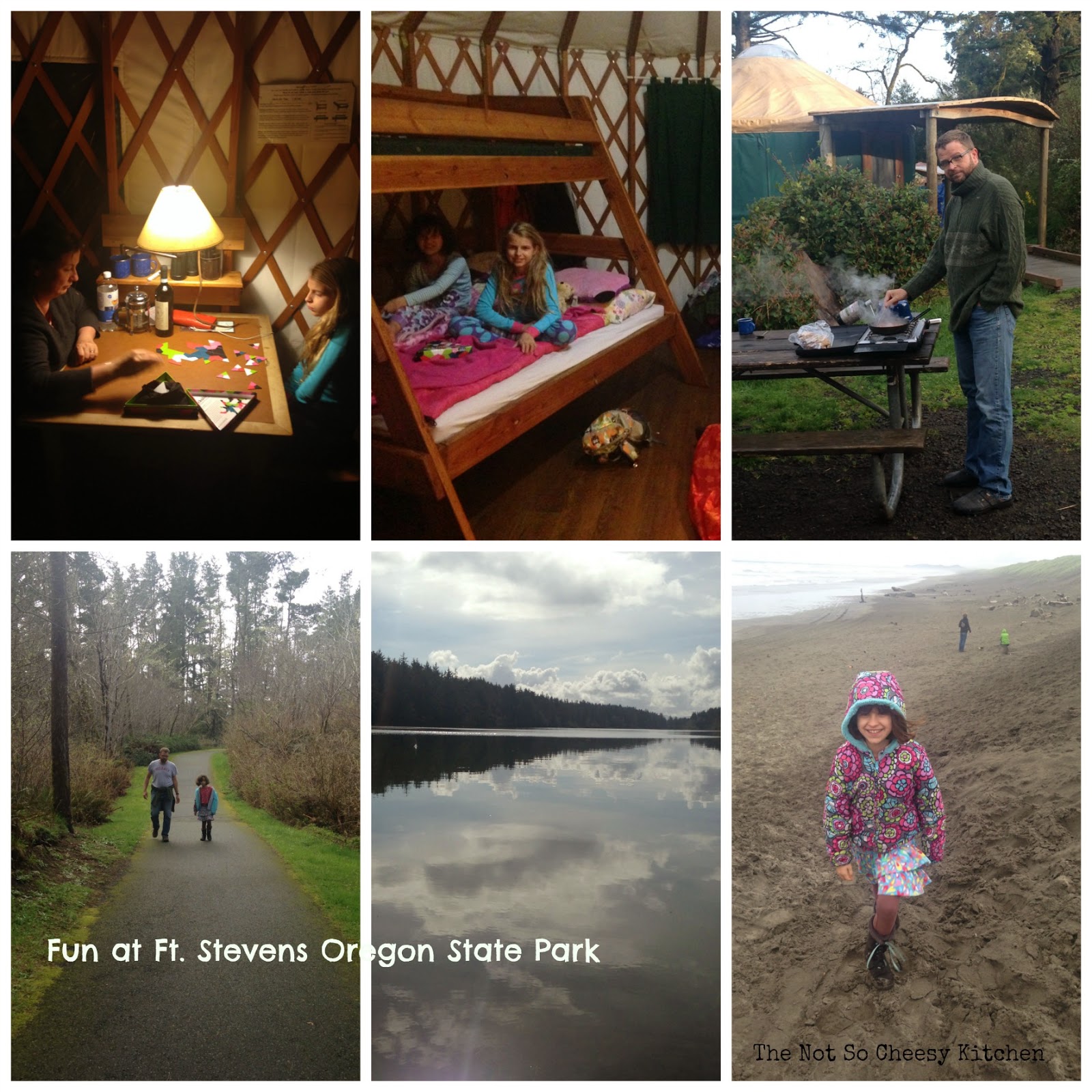 I do have one complaint about Ft. Stevens and that is that cars are allowed on the beach. Year-round the beach is open for cars to drove tp the shipwreck but the area north is closed off for the months May thru September.  Let's just say,  cars on the beach are not my thing…

Check-out is at 1pm leaving plenty of time to explore Astoria.  Alena loves to visit the Columbia River Maritime Museum  which really is an awesome place to visit, now you know there is a but coming, right so here it is blue skies - sun and yes, neither MiaRose nor I were into a visit this time.  Instead we watched a beautiful 3D movie about Galapagos Islands and then headed outside to the pier to tour the Columbia Lightship 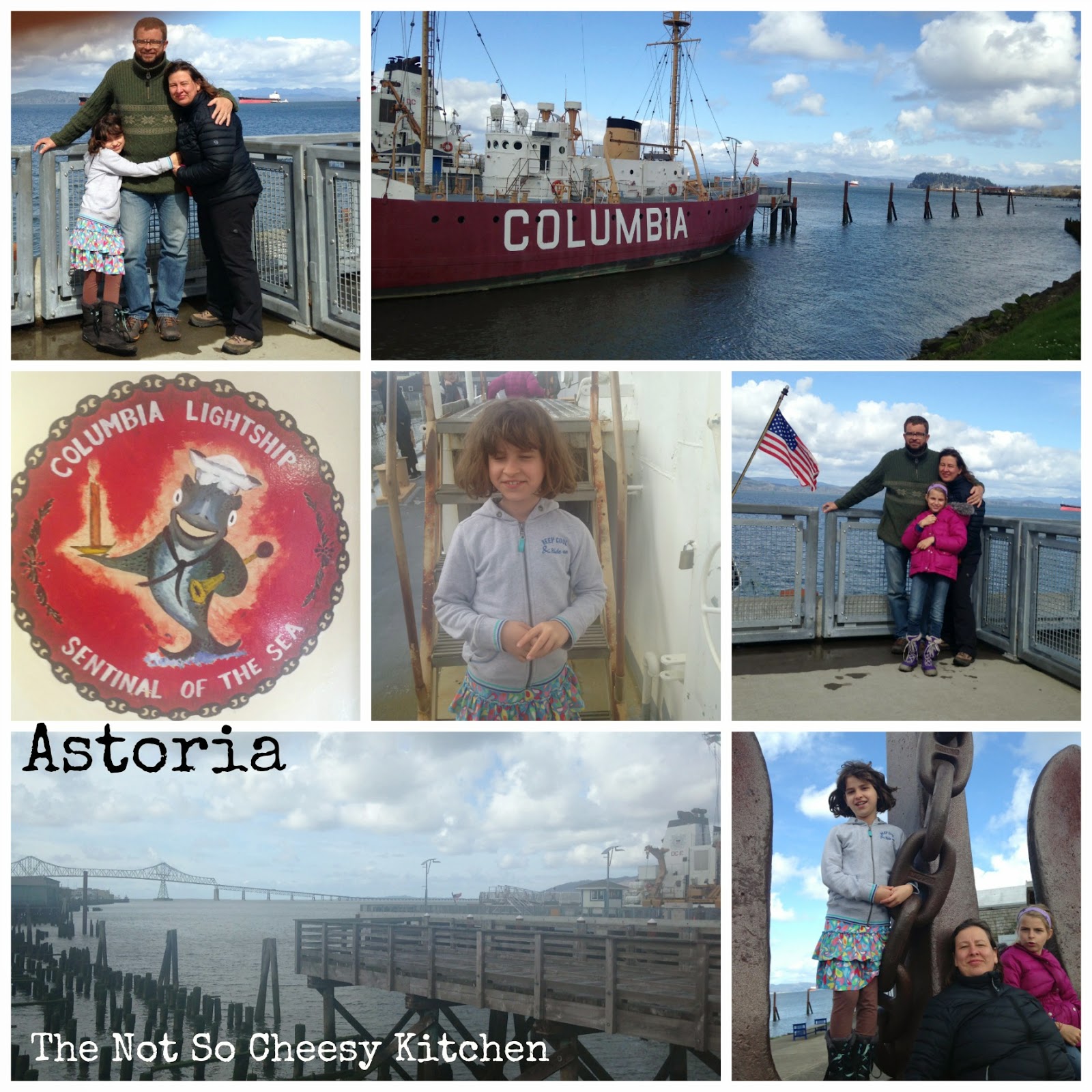 Feeling hungry our last stop was at Buoy Beer Company right on the river; the brewery is a little over one years old and neither the beer nor food disappointed.  The most amazing thing however are the views…I am talking right on the river,  pilot boats go by as do huge freighters coming off the Pacific Ocean and let's not forget the great viewing area of sea lions from the restaurant.  What do I mean?  Well, there is huge viewing area in the floor of the restaurant and below the floor are sea lions lounging.  Quite amazing and it's an awesome addition to the places to visit in Astoria. 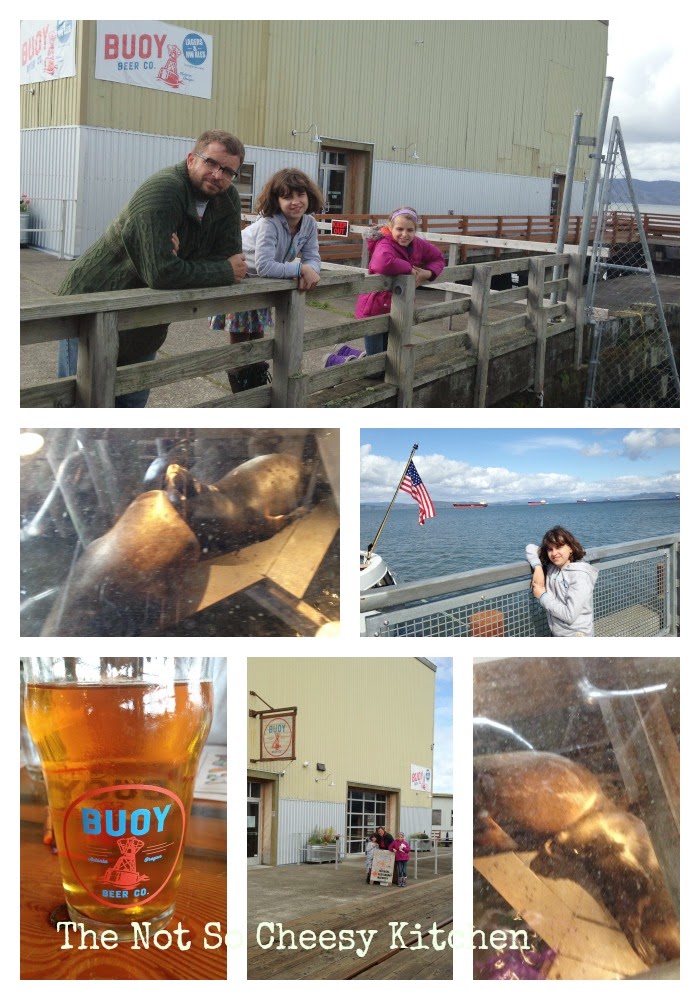 Yurts - as many campsites in Oregon - must be reserved ahead of time and they go quickly; we just got lucky but only got to stay one night.  Reserve your spot at ReserveAmerica

Be aware that cars are allowed on the beach at Fort Stevens State Park.