Welcome to the Galactosemia around the world kick-off post for 2014.  This is the third of - fingers crossed - many more to follow in 2014;  it is my goal for you to meet people from around the world who are living with Classic Galactosemia.  Once this disorder is diagnosed treatment must be immediately begin.  Treatment for  Classic Galactosemia is the elimination of Galactose {a long milk sugar} from the diet.  The baby must be immediately put on Soy formula, as galactose is also present in breast milk and can be deadly.  As the babies grow the elimination of Galactose from animal sources must continue. The tricky part about the diet is the many regional differences in recommendation etc. Not only treatment varies greatly, but also detection through newborn screening. Please contact me if you are interested in being featured {germanpdx (at) gmail . com}

In November Lisa from Italy was featured, in December you met Skadi from Berlin, and today please meet Kai.  Kai is three years old and lives with his Mama Stephanie, his Papa Dirk and sister Kira in North Rhine-Westphalia, Germany. 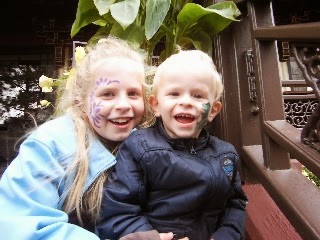 After a pregnancy with a couple of hick-ups Kai joined his big sister Kira ; the very next day Kai came down with a fever.  He was moved to the children's floor of the hospital.  Stephanie nursed Kai without any problems; he however drank very little and therefore a feeding tube was inserted.  By the third day of his life Kai had lost a lot of weight, and was jaundiced {yellow}.  The medical team became concerned decided to immediately perform the his newborn screen test and rushed.  Luckily the result  - positive for Classic Galactosemia - came back the very next day.  Kai was four days old.  His liver enzymes were very dangerously high elevated and Kai was immediately transferred to another hospital with a Pediatric Intensive Care Unit {"PICU"}.  Stephanie had to immediately stop nursing Kai and he was put on Soy formula.  Kai recovered fairly quickly and his family was able to take their new baby home when he was three weeks old. 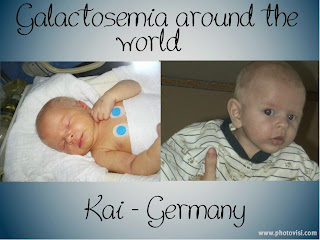 Today, Kai is a happy and healthy three year old. The family is cared for by the metabolic team in Düsseldorf and he is allowed to eat cheeses that have a   carbohydrate level below 0.1 g.  Kai is allowed foods containing clarified butter {butter oil/Butterreinfett}, milk protein, in addition to all fruits, vegetables, beans, and legumes.

Even so Kai is only three years old he already knows safe foods from unsafe foods. The family does not only keep "safe" foods in their fridge but Kai knows exactly which pudding to grab :) .  When out he always declines food from others and waits until his parents give the "green light".  Kai does understand that he cannot eat certain things containing milk as they would make him sick! 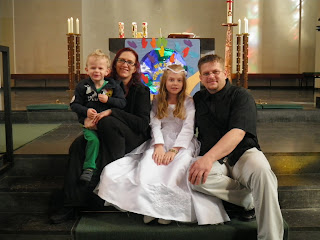