A nice walk and ice-cream treat... 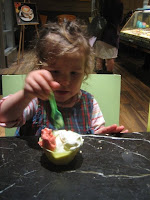 I am back...after the girls weekend away I slowly getting back into the swing of things and yes this past week was super busy :)

This afternoon we all went on a great pseudo hike in Forest Park. Forest Park is fantastic an urban oasis. You would never imagine that you are in the midst of a city. You could totally get lost in it check it out at http://www.forestparkconservancy.org/. Great day for a hike. Mia Rose, of course, fell asleep in the car so we packed her in the Ergo while Alena hitched a ride on top of Ron's shoulder's. This was not quite how we had imagined the family hike so. We pictures both girls running, walking, etc. Finally Alena decided to walk and she had a ton of fun. The walk of course was much longer than she liked. So we bribed her...it just sounds wrong :). What was the bribe...Ice-Cream. Which kid (and Mommy for that fact) does not like ice-cream?! It worked perfectly. Alena walked most of the way, and then we drove to get ice-cream.

Ice-cream you ask, in January? Ice-cream for the girls? - Oh YES!!! There are a couple of great Gelato places in town which always carry Sorbeto. Of course you must always ask about the vegan/milk free choices of the day. Today we went to "Mio Gelato" in the Pearl. They had five flavors the girls could eat. Lemon, Grapefruit, Raspberry, Pineapple, and Strawberries. Each girl had Strawberry AND Pineapple. YUM. - Ron and I of course also had gelato. Grapefruit/Pineapple sorbeto for me, and gelato for Ron. Great fun!

Mio Gelato has three locations in PDX. One in the Pearl, one on NW 23rd and a third in NE on Brazee.

Do you ever go out for ice-cream? Do you have great places where you live? Let me know! - I love to hear from you...