Welcome to the fourth Galactosemia around the World post.  Fingers crossed - that we all get to meet more people from around the world who are living with Classic Galactosemia.  Classic Galactosemia is a rare metabolic disorder which must be treated immediately by eliminating Galactose {a long milk sugar} from the diet.  Treatment must start as soon as the baby is diagnosed as otherwise the consequences can be deadly. For treatment babies drink non-dairy formula, as galactose is present in breast milk.  Treatment by elimination of Galactose from animal sources for individuals with Classic Galactosemia must continue for life. One of the tricky part about the diet is that the many regional differences in allowed foods.   Unfortunately not only treatment of this disorder varies greatly throughout the world, and even in the United States but also the detection through newborn screening.  In this series we have  met Lisa from Italy in November, we met Skadi from Berlin in December, and in January we Kai from North Rhine-Westphalia, Germany.  Today please meet Fabian from the Hessla region in Germany.  Please contact me if you are interested in being featured {germanpdx (at) gmail . com}

Now, please meet Fabian a happy and healthy three year old.  He lives his parents Katharina and Sven in the Hessla region of Germany and will become a big brother later on this year.

Katharina's pregnancy with Fabian was without any issues and he was born in 2010 by scheduled C-Section.  Newborn Fabian nursed without any problems right after birth, he did however spit up a lot.  Katahrina was told that spitting up by her baby was not an issue.  The newborn screening test was performed 36 hours after birth.  While filling out the paperwork for the test Katharina remembers telling her husband  "I never heard of any of these obscure disorders…" 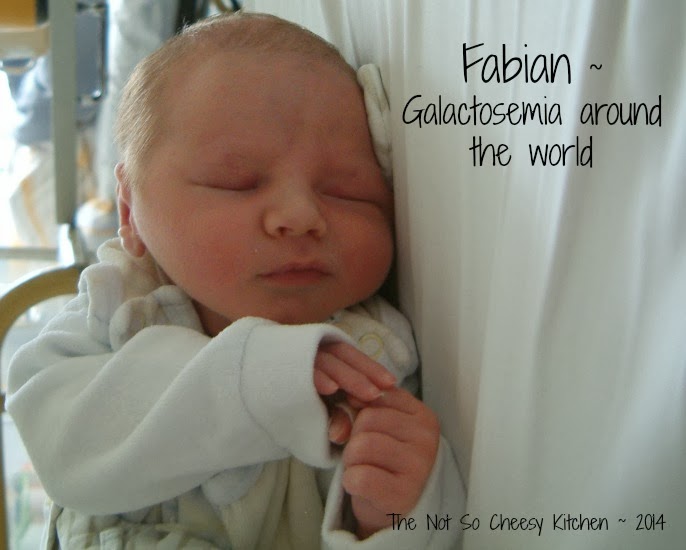 On day three of life Fabian became jaundiced.  Again, Katharina and Sven were assured that this was not unusual and were told "all boys turn yellow".  The test of Fabian's Billiruben test however reveled that his levels were highly elevated and he was immediately moved to the Nursery floor.  Katharina and Sven did not understand what was happening.  They were told, that with treatment under the lights Fabian's Billiruben levels should come down.  This did not happen and by day 4 of life Fabian was lethargic.  He no longer ate, his Billiruben levels increased, and his liver as well as kidney functions went - for lack of better term - crazy.  Katharina pumped breast milk, and Fabian was fed by GA tube.   His health deteriorated and by evening Fabian was transferred to the Pediatric Intensive Care Unit (PICU).  The physicians contacted pediatricians at specialized University clinics in Hannover, Heidelberg, and Gießen - they did not know what could be wrong with him.  Fabian was supposed to be put on dialysis on day 5 but he was too ill.  Katharina and Sven were told to stay the night with him.  Nobody knew what was happening and why Fabian's organs were failing.  Katharina and Sven held their baby the entire night - Fabian was so very ill. Then on day 6 Fabian's newborn screening results were called into the hospital. The test result revealed a positive reading for Galactosemia.  The physicians were astonished.  In medical school they had heard about Galactosemia, but none of the physicians in this hospital had never seen a patient with this disorder.

Fabian's feeding was immediately switched to a Soy formula; he improved almost immediately and after 4 additional days in the PICU he was transferred back to the regular Nursery where he stayed for another week.

Today Fabian is treated by the Metabolic Clinic of the University of Gießen and his GALT levels are currently tested on a quarterly basis.   In his diet Fabian is allowed to eat all vegetables, fruits, legumes,  cheeses that are aged at least for 3 weeks and also items containing clarified butter (Butterreinfette).  Katharina has found the dietician at their Metabolic Clinic in Gießen as a great help.  However, find the exchange with other parents the most helpful.  Katharina and her family met our friend Ulrike with her family (Skadi's family) for a weekend where they had many questions answered.  Katharina would like to thank Ulrike for all her support and help :) 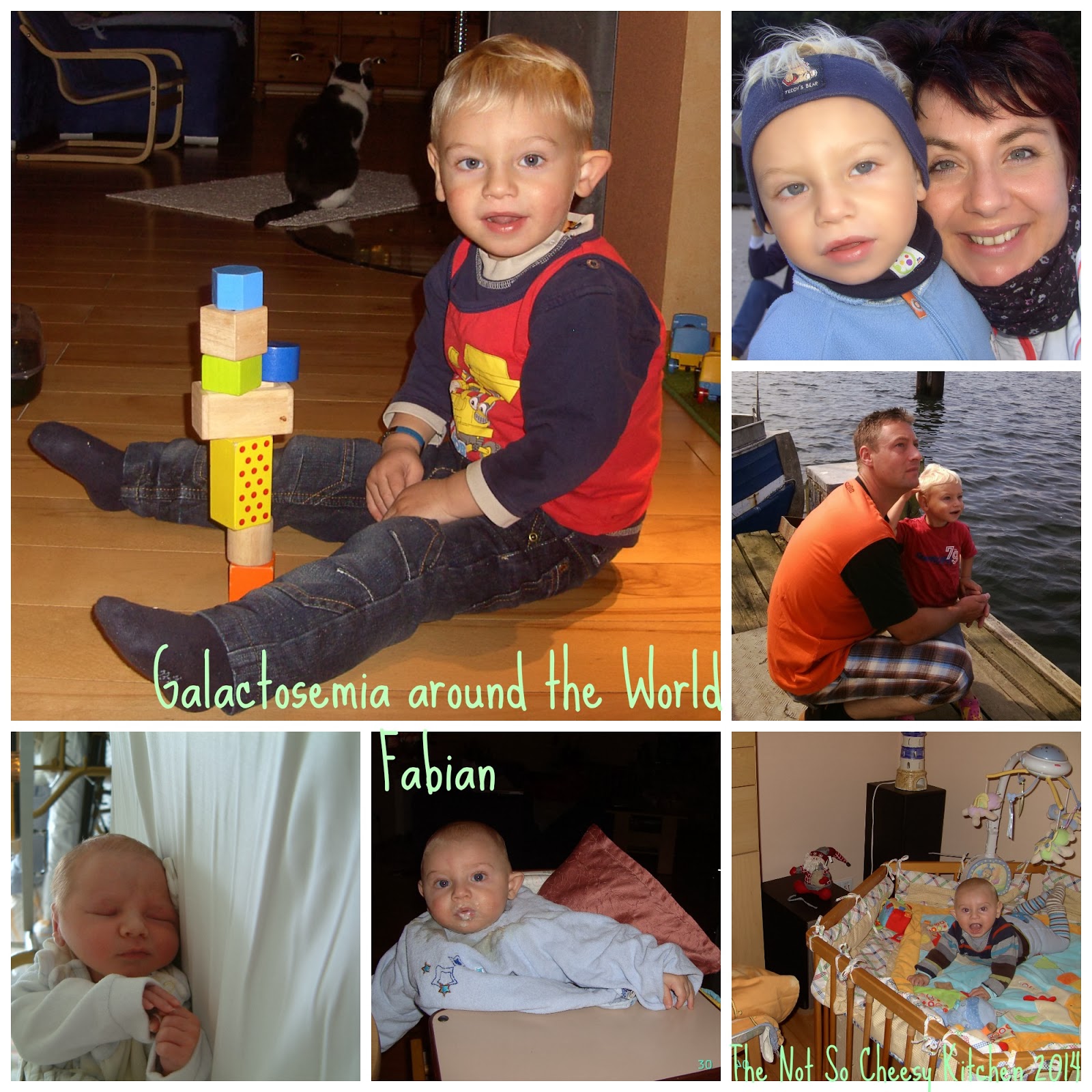 Fabian goes to Kindergarten (Preschool) and Katharina made sure to educate all the teachers as well as other parents about Galactosemia and which foods he is not allowed to eat. At snack time the teachers make sure that the kids do not share any food.  Birthday's are always a big deal and children bring treats from home; to make sure that Fabian is included Katharina connects with the other parent and determine whether or not he can eat the specific treat.  If needed Katharina makes him a "safe" version of the treat. It is amazing that Fabian, even so he is only three years old, is well aware that he cannot have milk.