Yes, I finally have an internet connection again.  I have to say that has been a wee bit challenging...OK truth be said, it has been really challenging for me ;) Besides the internet situation, the three of us have adjusted well and we have gotten into our routine.  The girls go to school in the morning, while I work, and shop on the market on Monday's as well as Friday's. So, just like in Portland the three of us look forward to the weekend.  This past weekend we drove up to Stuttgart http://en.wikipedia.org/wiki/Stuttgart for one of our good friend's birthday party.  They had also invited a bunch of our mutual friends that had moved back from Portland to Germany so it was like a reunion.
44 adults, and 34 kids in all - so much fun. 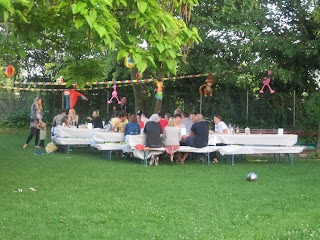 The kids met their friends again.  Alena played with one a friends whom she has known since she was two.  They had not seen each other in at least one and a half years. It was so cool to see, that after about 30 minutes they played with each as always.  They were inseparable for the entire weekend.  - The same thing happened with Mia Rosie and her friend. Once they warmed up to each other again it was like they had never been separated.  And for me?  Same thing, we just do not need the warm-up period.   I think that is the sign of true friendship.  When you can pick up just where you left off.  Yes, even if you live in different countries and continents.  Cheers to friendship!