After our amazing breakfast - courtesy of Ron :) - we headed downtown Portland for our last concert of this year's Kids Concert Series of the Oregon Symphony at the Arlene Schnitzer Concert Hall .  Each concert in this series has a different theme.  This ones was "Castles & Wizards" and it was - as all the concerts - wonderful. Here is the link with a brief description http://tickets.orsymphony.org/single/EventDetail.aspx?p=1686

Take a look at the girlies - not quite sure.... 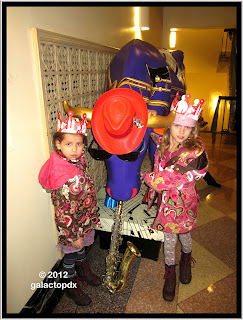 ...and wearing their crowns.

This one is after the concert together with... 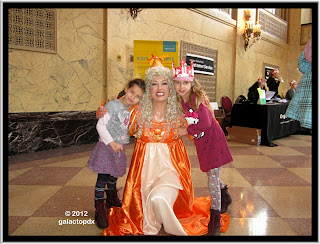 ...Princess Orange who by the way performed "Almost there" by Randy Newman from the movie "Princess & the Frog".  Both girls were just in awe by the princess a.k.a. Pam Mahon who is also the narrator extraordinaire of the Kids Concert Series.

Now, you just know what comes after the concert, right?  Yes, dinner out.  We have been going to Pastini's downtown Portland, but we - the parental units - felt like something different.  So we headed back to Southeast Portland and went to Hoda's Middle Eastern Restaurant.  http://www.hodas.com/ As you probably know, our girls eat all beans, legumes, fruits, veggies including garbanzo beans and both love Hummus.  We feasted family style and it was enjoyed by the four of us.  One word of caution, if you omit milk do not eat the Baba Ghanjoue  as it contains milk.

Here is a picture of the girlies after dinner... 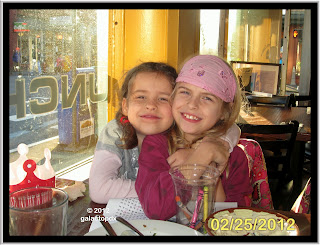