...really snuck up on us this year.  In previous years I have always decorated the house, and wrote the "trick or treating" post early.  Well, not this year - as you can see. The pumpkin was carved on Sunday night and that was our decoration. The costumes for the girls were not elaborate either, as they are not allowed to wear costumes to school.  They did however have an after school parade.  Mia Rose dressed up as a "Princess Vampire", and Alena as a "Fairy Vampire" - they came up with it all by themselves.  Sparkles, lipgloss, wings for the fairy, and a princess dress for the Princess :) 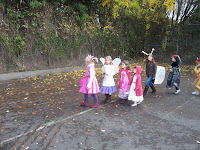 We went "Trick or Treating" after dinner - but already had a couple of "trick or treaters" ring our doorbell while eating.  The girls were so excited to hand out candy.  -  Before hand, they both inspected the treats.  I had gotten - as every year - the "Galactosemia Safe" candy.  Which includes Sunburst, Nerds, etc. and then I also found safe chocolate treats.  Whoo-hoo!!!
We set off once it was dark, and the girls loved it.  At the first couple of houses, the girls asked whether they could have dairy free treats...but we explained to the ladies, that we can exchange "unsafe" candy for "safe" candy once we are back at home.  With that change in mind, they selected the treats for their bags by packaging.  Lot's and lot's of chocolate this year, but also lot's of Skittles, Sweet Tarts, temporary Tattoo's and other safe treats.  At home,  we unloaded the heavy bags and Alena divided her candy by safe and unsafe treats.  Ron helped Mia Rose divide her candy up.  Alena asked however "why do people mainly give candy? The tattoo's are so much better...."  Well, who knew! The ladies had a very successful night procuring candy :)  - and because since there is still so much "safe" candy left, there was no need to  exchange.  There will be plenty so, if they run out...
I hope you also all had a fund and safe Fright Night :)